Power and CO2 for EOR

We have had this project on our “To-do” list since 2012. However the hardware remains available and the project makes even more commercial sense now than before.

The fundamental concept is to deploy a standalone oxy-combustion power plant that provides both power and CO2 to a smaller oilfield operator for enhanced oil recovery.

Furthermore, the fuel supply is predominantly based upon direct use of the reservoir gas (with optional NGL recovery).  But there is no need for clean-up as is the case with conventional CO2-floods.

The first point to note is that all the above components are commercially available: 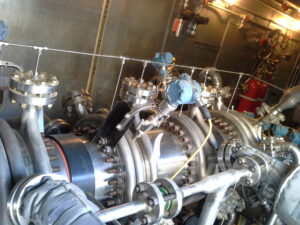 The Oxy-Combustor was first developed and tested by Clean Energy Systems (CES) nearly 15 years ago. It has now evolved to become a 170 MWt unit that fits inside of a container and is delivered almost as plug & play.

It is based on rocket technology, and has been extensively tested in multiple process configurations; having a unique capacity to use poor quality fuel gas without any pre-requisite treatment beyond particulate filtering.

The process cycle is also net water positive and there are numerous used ASU´s available for oxygen supply, or alternatively one may locate adjacent to an industrial oxygen pipeline, which is often the case along the U.S. Gulf Coast. 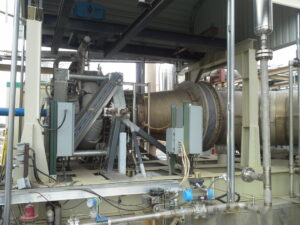 Similarly the turbine expander is based upon a standard General Electric J-79 jet engine that was first developed in the 1960s.

CES have removed the compressor and with only minor additional modifications demonstrated and tested the hardware at their Kimberlina Test Facility near Bakersfield, Ca.

The adjacent image shows the turbine in-situ with flow from left to right into the exhaust piping manifold.

The combustor is in a container (not visible) behind the turbine. All major components are skid mounted and can be trucked in place or subsequently moved with minimal outage.

So why are these units not in operation already? The answer is that there are many explanations why technologies do not immediately surface during a paradigm change. We can go into those details later here (TBD).

For now it suffices to say that this is a niche-market deployment which could be suitable for a smaller company that has an ageing oil reservoir producing more water than oil; but where they know that CO2 might provide stimulus for increased oil recovery.

Our goal is to joint venture with such existing owners, or take over operations of the field on behalf of the owners, who would retain rights to production royalty.

We therefore want to kickstart this project to complete a Feasibility Study and are seeking funding in the order of $250k.

The Study would include estimate of field capital investment necessary for upgrade to CO2-flooding, as well as plant capex and evaluation of optimal reservoir response as we schedule injection of the CO2.

The knowledge would then be sufficient to prepare a project cash-flow analysis (pro forma) for a nominal 10-year life-extension of the field.

In a previous study we targeted a total investment of ~$75m having payback after 3 – 4 years and internal rate of return of ~25%.

The Power Plant can be configured to produce from 5 up to 50 MMcf per day of CO2; has no flue stack and is therefore eligible for fast-track permitting similar to renewable energy sources.

All hardware has a maximum lead time of less than one year, so that implementation within 15 months of an investment decision is achievable.

But how does this advance the challenge of global warming and climate-change?

We need to get this technology into commercial operations.  It is one of a portfolio of emerging technologies that utility companies can eventually use for CO2 capture on coal and NG-fired power plants — but these technologies all need to have been demonstrated commercially — albeit on a smaller scale — in order to be considered.

Furthermore, we promote CO2-EOR because it helps create a technology bridge and maximizes production from existing reservoirs, rather than have oil companies go exploring in new regions like the Artic and Barents Sea — which we do not advocate, because these regions are much more environmentally sensitive.

We will get back to you within 24-hours.