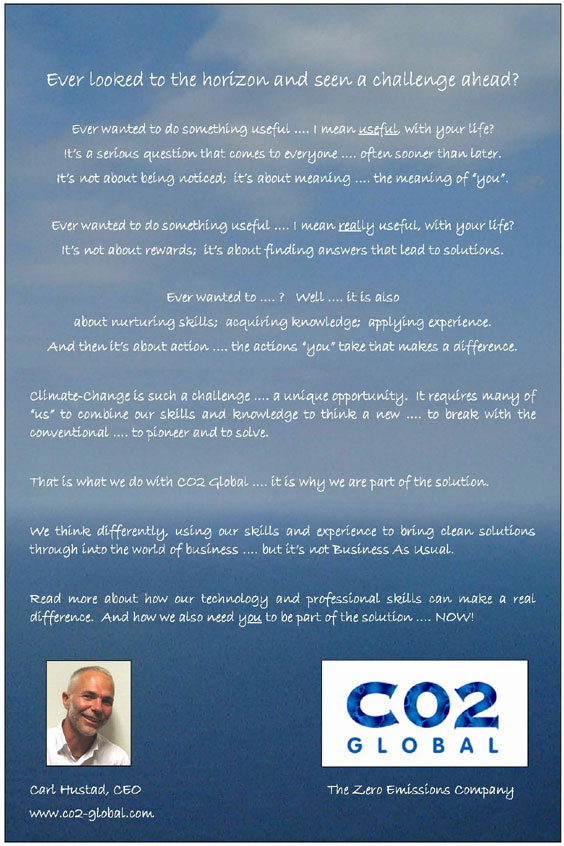 The roots of our company go back to January 2000 and work in CO2-Norway.

In Europe our team was already in 2001 the promoter of CO2 for EOR in the North Sea (CENS) and part of the CO2Europipe consortium that prepared an extensive study for the European Commission identifying barriers to deployment of a pan-European CO2 infrastructure.

In 2004 we participated in the first technical, economic, legal and institutional assessment for Large-Scale CO2 Sequestration on the Norwegian Continental Shelf (NCS) in collaboration with SINTEF, Norwegian School of Management, CICERO and Law Faculty at Oslo University. This was the first time that a CO2 infrastructure on the NCS had been studied holistically from a societal perspective and not just for oil & gas exploitation.

In 2008 CO2-Global was part of the Integrated Gasification Steam Cycle (IGSC) consortium that completed a two-year study funded by the UK government for integration of oxy-combustion technology with existing coal-fired power plants. This work was conducted in collaboration with Jacobs Engineering, Clean Energy Systems, Siemens Power Generation, MAN Turbo and Imperial College.

In the United States we have been based since 2004 in Houston, Tx and have focused on developing projects that provided power and CO2 to oilfield operators wanting improved recovery using tertiary CO2-EOR along the Gulf Coast and in the Permian Basin.  The technology is also able to use low-quality fuel, gas and refinery waste-products for power generation.

More recently we have also started focusing on carbon capture from other sources such as municipal waste management, plastics and the cement industry.

CO2-Global draws on an international group of active shareholders having development experience from power generation, oil & gas and the CO2 business.

When the challenge at hand is CO2 and global warming — an issue that has concerned some of us for more than two decades — we observe that;

(i) identifying a low-risk / high-return commercial pathway can be challenging,

(ii) governments and politicians have a tough job getting their act together, and

(iii) attracting investment capital into this arena is the only logical long-term solution.

The adjacent image first appeared on 9th September 2006 in The Economist Magazine — a weekly news publication extensively read by leaders of industry and policymakers — indicating that the warning lights have been on for some time.  This was plausibly the first time that the business community was provided with a clear statement that global warming was real.

At that time a two-degree rise in global temperature, compared with before the industrial revolution, was not being discussed; adapting to climate-change, if at all, was for our grandchildren to consider; and there was a significant degree of scepticism to the IPCC Report that had been published in 2001. 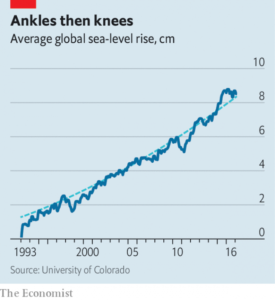 Perhaps not surprisingly, now thirteen years on, the ‘two-degree’ target is behind us and it is our generation that is already having to pay for rising sea-level and coastal erosion — disproportionately it would seem, between the have’s and the have not’s.

This is a classic example of experiencing paradigm change where the unthinkable, becomes speakable, becomes reality while everyone is still trying to fathom out how did we get here in the first place!

In this ‘new’ reality it is our strategy as project developers to present solutions, identify opportunities, bring parties together and implement the best technologies as these become commercially feasible.

To achieve this we stay abreast of the market development by understanding the fundamental issues that invariably impact the bottom line.

However this also requires an understanding of four arenas encompassing politics, media, technology and finance. You can read more about these here (TBD).

We will get back to you within 24-hours.